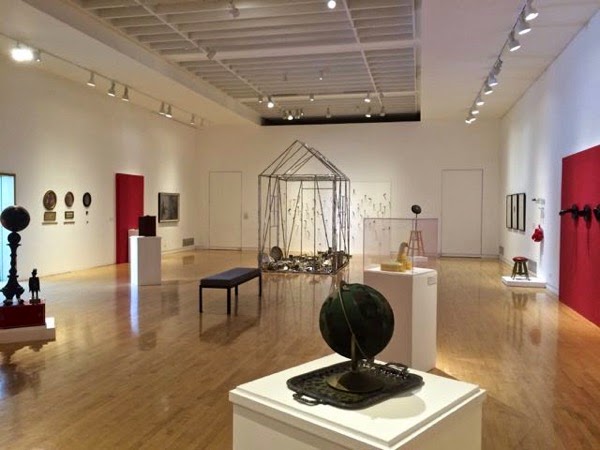 On Tuesday, May 5, 2015 get ready to give for 24 hours to benefit your favorite local nonprofits. This is a great way to donate to organizations doing fantastic work like the Richmond Art Center.  One of the oldest arts organizations in the Bay Area and the largest arts center in the East Bay, the Richmond Art Center provides quality programs and experiences in studio art, art in the community, and in exhibiting works of emerging and established Bay Area artists. We provide an invigorating environment where one can make, see and learn about art!

Here is your chance to make a difference! The Art Center’s goal is to raise over $3,000. Spread the word among your friends, acquaintances, and networks about the importance of East Bay Gives! Encourage them to make their own donations to Richmond Art Center and other participating charities.  Like the East Bay Community Foundation on Facebook and follow us on Twitter, so that you can share posts about the event and the Art Center’s progress. Donate often on May 5th! Click here to make your donation. Art in the Community Director Rebeca Garcia-Gonzalez shares an exciting update on how the program is engaging Richmond families in support of one of the city’s most important cultural celebrations of the year, Cinco de Mayo:

“Latino families are the students in a new class the Richmond Art Center is offering in collaboration with the Cinco de Mayo Parade Committee, the Latina Center and Richmond High School. The families are designing two floats that will become part of the Peace and Unity Cinco de Mayo Parade. The idea came from the parents and community members who are part of the parade’s organizing committee. They wanted the teens to participate in an art-making experience in connection with the parade’s floats. Such an experience, they believe, can help build community and channel teen energy towards a creative and engaging project. These art classes are free to the students, and are financed in part by the generosity of the San Pablo Koshland Fellows.

Mildred Howard sat down with Sean Pyles from Radio Free Richmond for a casual one-on-one interview. We love the conversation that emerged!

You’ll have an opportunity to meet Mildred Howard during an upcoming talk Don Farnsworth – Magnifying Magnolia and Mildred on Sunday, April 19 from 2 – 3:30pm. This will be a great opportunity to hear about Don’s methods and experiences working with artist Mildred Howard and see her 40 years of work in person!

A tall narrow house constructed from knives, an old photo of a black family scorched onto World War II bond papers, and bright red boxing gloves hung on the wall above a stool. These are among the images in Mildred Howard’s new show at the Richmond Art Center.

Howard, a Bay Area artist who has shown her work around the world, focuses on everyday images and the memories they conjure. A house is not just a house —it is a beacon for the hidden pains and historical burdens of African Americans. Our first Saturday bilingual See & Make Art Tours are a favorite part of our month! We love opening our doors to new (and returning) families and kids, showing them the art in our galleries, hearing what they think and inspiring them to create art during a hands-on activity. Last month we were lucky to have Malcolm Marshall of the Richmond Pulse as one of our guests. He shares his experience in the April edition of the paper and online.

We hope you’ll stop by this Saturday, April 4 or on May 2 for one of our free tours, which are designed so the whole family can take part. Please meet the group at 3:00 pm in the Madeline F. Whittlesey Community Room at the Richmond Public Library, Main Branch (325 Civic Center Plaza) and we’ll walk as a group over to the Art Center.

Children and families explored their creative spirits together by seeing and making art at a bilingual art tour hosted by the Richmond Art Center March 7.

Lauren Ari, a teacher at the art center, led the group of about 10 on a guided tour of the center’s galleries, along with a hands-on art-making activity. Children’s ages ranged from 3 to 8. KQED Arts is a phenomenal resource for educators, parents and art-loving folks of the Bay Area, so you can imagine how honored we were when writer Kristin Farr covered our 50th Annual WCCUSD Student Show as a part of Arts Education Month.

We think this article perfectly caps off a great month of arts education coverage — thanks KQED Arts!

We hope you will come celebrate with these students and their families during our special reception on Thursday, April 23 from 5 – 7 pm.

This year, celebrating its 50th anniversary, the student exhibition features work by over 200 students, as well as that of returning students and faculty.

As the Art Center’s Teri Gardiner explains — addressing the Art Center’s long-term commitment to young people — founder Hazel Salmi believed that an artist lies within everyone. “The exhibition celebrates and showcases the students’ creativity,” Gardiner says, “and the important role that art plays in education.” The SF Chronicle featured our exhibition Mildred Howard: Spirit and Matter on the cover of the Datebook. Writer Jesse Hamlin stopped by the Richmond Art Center to preview this four-decade survey and to speak with Berkeley artist Mildred Howard.

We hope you will join us for one of the many public programs associated with this exhibition. This solo exhibition runs through May 24.

Mildred Howard plunged about 130 butcher knives into a wall at the Richmond Art Center, where her 2005 installation “Safe House” is being re-created for “Mildred Howard: Spirit and Matter,” a four-decade survey of the Berkeley artist’s provocative and poetic work that opens Sunday, March 22.

The piece, originally created for the opening of San Francisco’s Museum of the African Diaspora, juxtaposes the knives with a metal-framed, house-like structure whose floor is covered with silver and silver-plated domestic objects — chandeliers, platters, creamers, teapots — that go from polished to tarnished. It’s one of a series of pieces exploring the notion of “home” that the prolific assemblage and installation artist has made over the past 20 years, in addition to creating wry smaller-scale sculptures, graphic work and big civic projects such as “Three Shades of Blue” — a series of blue glass panels on the Fillmore Street bridge over Geary Boulevard, etched with a jazz-themed poem by Quincy Troupe — and the “Salty Peanuts” sculpture at San Francisco International Airport, composed of 130 saxophones. The Richmond Art Center announces its spring exhibitions which includes an exhibition of works by artist Mildred Howard, plus a milestone 50 years of the annual exhibition of the West Contra Costa Unified School District Student Show. These exhibitions will open with a reception on Saturday, Mar 21 from 4:00 – 6:00 p.m.

The main exhibition, Mildred Howard: Spirit and Matter, will showcase works by Bay Area artist Mildred Howard. Over the course of four decades, Howard has created rich and evocative work by taking common objects of daily life and infusing them with meaning to illuminate the underlying significance and historical weight of cultural form. In free-standing sculpture, in wall-mounted musings, in graphic explorations and in representations of shelter, Howard has developed a language to address racism, injustice, need and compassion.

Howard’s work is already familiar to those living in Richmond, her public installation, Moving Richmond,, a work in which a poem by Macarthur Fellow Ishmael Reed was incised into a forty-foot wall of faceted steel can be seen at Richmond’s BART Station.